Studies suggest that endometriosis affects 1 in 10 women of reproductive age, with an estimated 176 million women worldwide having the condition.

Endometrial cells found outside the uterus grow to form lesions or patches that bleed and leak fluid in response to your hormones at the time of the period. This leads to inflammation and scarring. These patches found outside the uterus cannot pass out of your body and remain in your pelvic cavity, on organs and other surfaces. On your ovaries, cysts called endometriomas can develop over time. These are sometimes called 'chocolate cysts' because of the darkish material they contain. On other surfaces the patches can form nodules (or lumps of endometriosis ).

There may be different forms or types of endometrios: 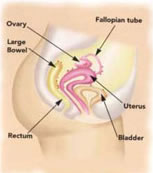 The most common sites of endometriosis

Retrograde menstruation which causes most endometriosis